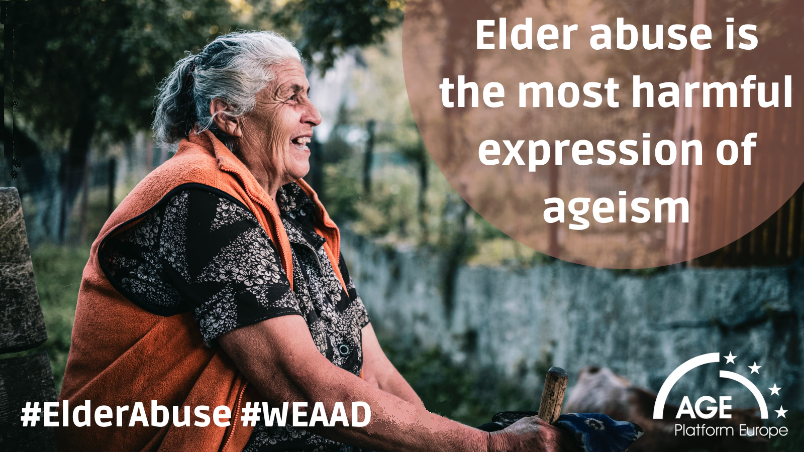 Photo by Mihai Lazăr on Unsplash

There should be no place for violent and abusive behaviour on a continent which values union, solidarity and equality. Yet too many older people still experience abuse today. On the World Elder Abuse Awareness Day and after two years of COVID-19 pandemic, which exposed the massive phenomenon of abuse in older age, can we hope for positive developments towards ensuring dignity in old age?

With one in six people aged over 60 and one in four among older people with high care needs suffering abuse, elder abuse is a blatant reality that proved to be more topical than ever amidst the pandemic. Those figures are hard to justify in a European Union that claims to promote human rights for all, and while the sustainability of the rapidly ageing European population would require to be inclusive for older people.

Redefining our vision of dignity in old age

Last year, the release of the Green Paper on Ageing by the European Commission opened a wide debate on the impact of an ageing population. Our expectations were high, but despite the wide range of topics covered, we regretted that the European Commission’s initiative overlooked the issue of elder abuse. An issue though likely to increase – and all the more so if nothing is done to improve the situation.

Some positive steps for older women?

“Violence against older women remains an unspoken issue in many societies and a taboo grounded in deep-rooted sexist and ageist prejudices and stereotypes and discriminatory cultural and social norms. Power dynamics and inequalities leading to emotional, financial, material, physical and sexual violence are likely to exacerbate with older age."

On 11 May, the Council of Europe Convention on preventing and combating violence against women and domestic violence, known as the ‘Istanbul Convention’, celebrated its 10th anniversary On 13 June, we celebrated the EU accession to the Istanbul Convention. This instrument is an important concrete step forward in recognising and tackling violence against older women (read our article). Since 2016, we have been calling on the European Union to ratify the Istanbul Convention. But despite strong commitment from the Civil Society Organisations, our call has not yet been responded. We still hope to see a reversal of the trend this year with its 10th anniversary’s celebrations.

Earlier this year, on the International Women’s Day, the European Parliament and the Council of the EU issued a Directive proposing a number of measures to strengthen the protection against gender-based violence and domestic violence. We contributed to the call for input launched prior to the publication on this directive, stressing that older women are often forgotten in policies around gender-based violence. Older women face multiple and intersectional discriminations, notably in regard to the intersection between ageism and sexism, and life-long histories of intimate partner violence.

If some positive advancement can be noticed in the protection of older women against abuse and violence, additional tools are needed to cover all older people and all situations.

The 2012 European Union Directive on the rights or victims of crime is an important step towards enforcement of essential standards on the rights, support and protection of victims in all EU countries. While there is no mention of elder abuse as such within the Directive, the ban of any forms of discrimination, including age discrimination, in access to rights and protection is enshrined throughout the text. And the EU Strategy on Victims’ Rights (2020-2025) explicitly identifies older people as one of the groups in need of specific measures. These instruments should help to improve reporting and to ensure support and protection: still there is a lack of awareness of the potential they do offer. The revision of the Victims’ Rights Directive launched on 8 March is an opportunity to close this gap.

Hate speech and crime explored in the mid of the COVID-19 pandemic. Generational prejudices and discriminations were exacerbated laying bare the structural ageism in our society. In 2020, a few months after the outbreak of COVID-19 in Europe, we raised awareness of the close link between discrimination and prejudice on the one hand and hate speech, violence, abuse, neglect or depriorisation on the other hand. One year later, in 2021, we asked for the inclusion of hate speech and hate crime on the list of EU crimes.

The EU Care Strategy to be released by the European Commission later this year. This strategy offers an opportunity for positive advancement in the fight against elder abuse, provided it takes a right-based approach. It should also uses a gender perspective to improve the working conditions and status of underpaid and undervalued women workers, who represent the majority of carers.
The European Parliament has recently set up a new special committee that will draw lessons from the pandemic and better prepare the EU for future crisis. This initiative echoes our joint call with the European Trade Union Confederation (ETUC) for an investigation into COVID mismanagement in the field on long-term care.

While they are policy levers at EU level to tackle elder abuse, we lack systematic mainstreaming and coordination among different European Commission services on ageing. This is why we continue to call on the European Union to adopt a European Age Equality Strategy to challenge ageism and guarantee that equality is a practice for everyone, everyday.

Beyond the EU, the global context is also very important and offers opportunities to strengthen the combat against elder abuse. This year’s World Elder Abuse Awareness Day (WEAAD) coincides with two important events at international level: the start of the United Nations Decade of Healthy Ageing (2021-2030), with a focus on the fight against ageism, and the fourth review and appraisal of the implementation of the Madrid International Plan of Action on Ageing (MIPAA).

Last but not least, a United Nation’s Convention on the rights of older persons would help identity the gaps in protection and provide a clear baseline, enshrined in law, to guide better policies, laws and services in future.

"An ageist society is an abusive society", said one of AGE members.

From this standpoint, we can say that progress is slow and we still have a long way to go. But we may now know better how to move forward… 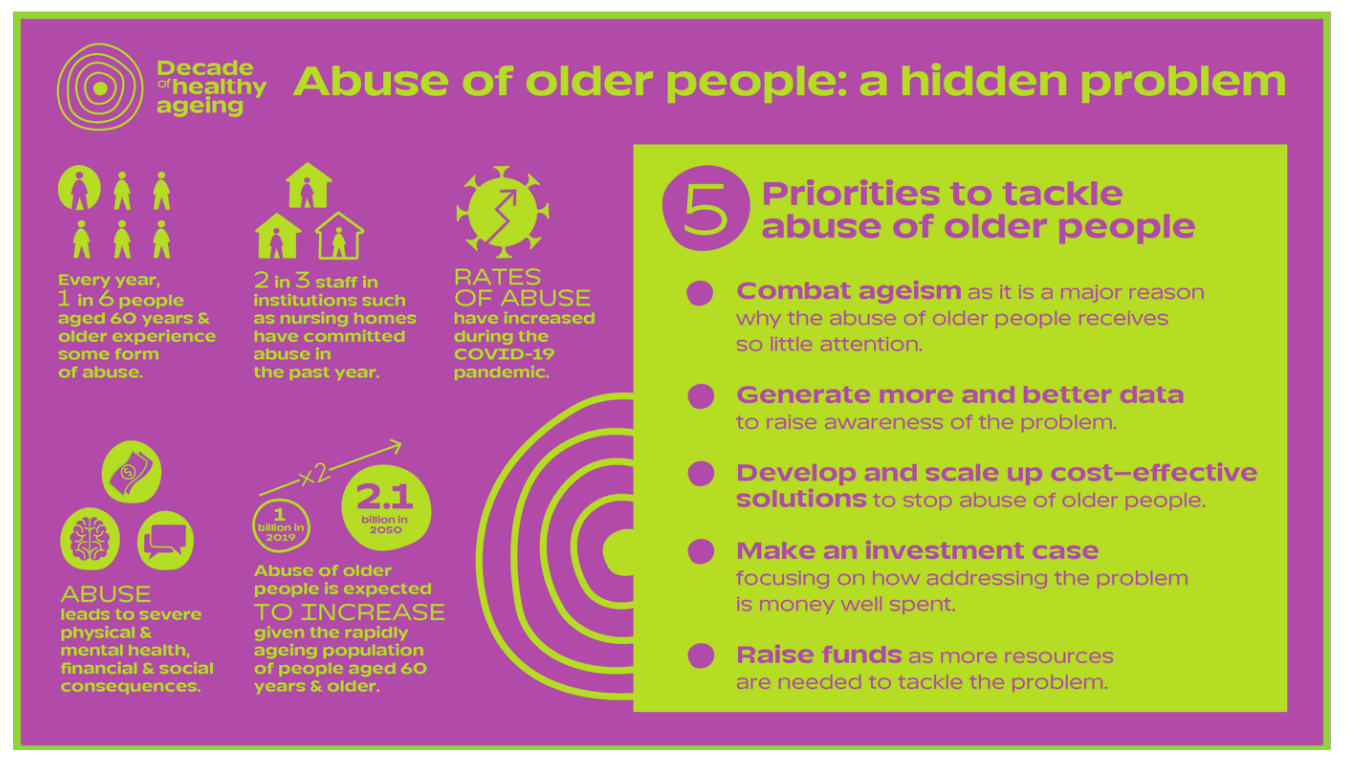