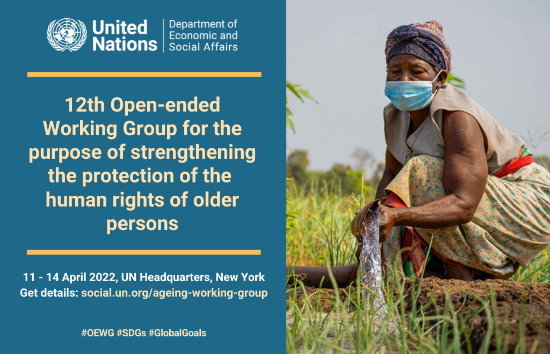 Despite massive mobilisation from civil society for the 12th session of the United Nations Open-Ended Working Group on Ageing, governments showed little commitment towards the creation of an international legally binding instrument. However, some advancements marked this year’s edition: the stronger call by some EU member states in favour of a United Nations’ Convention on older people’s rights and Argentina’s proposal of a cross-regional group to prepare the 13th session.

The 12th session of the UN Open-Ended Working Group on Ageing (OEWG12) was held at the United Nations Headquarters in New York City from 11 to 14 April 2022. The meeting discussed the normative inputs from last year on access to justice and the right to work, and access to the labour market in addition to this year’s new focus areas on the contribution of older persons to sustainable development, and economic security. An additional panel examined how to strengthen the promotion and protection of the human rights of older persons in the context of COVID-19 pandemic and beyond.

Some Member States, NGOs and National Human Rights Institutions (NHRIs) repeated their calls to adopt a UN convention, yet no tangible progress towards the creation of an international legally binding instrument was made. In addition, no decision was taken in the final session on the Way Forward regarding the focus areas for next year.

On the first day of the OEWG12, the EU Delegation started by condemning ‘Russia’s unjustified attacks against Ukraine’, and mentioned key EU developments, notably on digitalisation, the EU Green Paper on Ageing and the EU Care Strategy. The EU Delegation concluded by mentioning that they hoped for ‘tangible progress’ to be made at the OEWG12.

NHRIs and NGOs unanimously reiterated the need for drafting a new UN convention, highlighting that it was time for the OEWG to fulfil its mandate and for UN Member States to take concrete actions as to recognise and fulfil the human rights of older persons. Among NHRIs, Austria, Germany, Italy, Slovakia, and Slovenia supported the creation of a UN Convention.

On the one hand, civil society organisations were disappointed by the poor attendance and contribution of Member States during the OEWG12, which demonstrated the lack of commitment and political willingness of advancing human rights of older persons at EU and international level. On the other hand, the OEWG12 accredited 22 new Non-Governmental Organisations (NGOs), showing civil society’s continued involvement in advocating for older persons’ human rights.

Mr. Abdulla Shahid, President of the 76th session of the United Nations General Assembly, opened the OEWG12 by mentioning that ‘the current international legal framework remains fragmented and incomplete to address specific protection gaps for older persons to enjoy their human rights’ calling on member States to consider ‘the feasibility of further instruments and measures’, setting an ambitious political will for the session.

Ms. Michele Bachelet, UN High Commissioner for Human Rights, was the first UN High Commissioner who participated in person at the OEWG. She made a powerful call for the adoption of a UN convention, stressing out that older persons remain invisible and need stronger protection to enjoy their rights.

Ms. Claudia Mahler, Independent Expert on the enjoyment of all human rights by older persons, mentioned several times the importance of intersectionality between ageism and gender, and ageism and disability, when tackling systemic barriers older persons face. This statement was also shared by the UN LGBTI Core Group who stated that ‘older LGBTI persons can face additional challenges, such as ageism, neglect, abuse and violence, isolation, stigma as well as multiple and intersecting forms of discrimination just because of who they are and whom they love.’ Ms. Claudia Mahler mentioned several times the need for disaggregating data by age and sex as older women remain invisible in the statistics.

Argentina’s Proposal: The Creation of a Cross-Regional Core Group

On the last day of the OEWG12, Argentina invited member States to join a Cross-Regional Core Group.

This core group would work during the intersessional period with two objectives. Firstly, the cross-regional core group would discuss possible gaps in the international human rights system for older persons, considering relevant documents such as the UN Office of the High Commissioner for Human Rights (OHCHR) 2021 Report. Secondly, these informal consultations with the entire membership would lead to the creation of a draft text that would be submitted for consideration of the 13th session on the UN Open-Ended Working Group on Ageing (OEWG13) in 2023.

Next Steps for our Advocacy Towards a UN Convention

We will continue to raise awareness on the importance of adopting a UN Convention on the rights of older persons at national level by using the #EULeadsTheRally campaign. We will also further support our members in asking for their governments to engage and commit on advancing the human rights of older persons.

AGE will continue joining forces with the civil society to advocate for a UN Convention. In addition, we will push for further discussions with the European Commission and Members of the European Parliament. Finally, we will try to ensure that older persons are consulted at all stages of the process and that their engagement and contribution are visible, notably in OEWG13 panels and side events.

Want to Learn More About AGE Contributions to OEWG12?

You will find our contribution to the OEWG12 here.