‘We want to age with rights’: advocates mobilise ahead of UN discussions 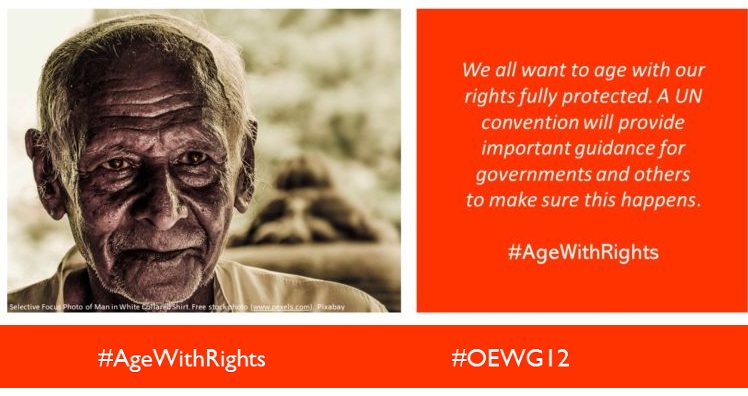 On 3rd March, older people around the world are gathering under the same banner to urge governments to act. This mobilization is taking place a month ahead of the 12th session of the United Nations Open-Ended Working Group on Ageing (OEWG), where governments have shown little progress in defend human rights in older age.

This year, the OEWG will focus on the topics of economic security and the contributions of older people to sustainable development. In addition, the 12th session will discuss normative aspects of the rights to access work and justice, exploring how these can be detailed in a new UN convention. From 11 to 14th April, it will be possible to follow live interventions and debates via online streaming.

Learn more about the OEWG

Through a series of online meetings, AGE has worked with its member organisations to prepare written input to the call for contributions. Final submissions will be published on AGE and the OEWG website. The deadline has been extended to 22nd February.

Officials take a stand for our rights in older age

In October 2021, the UN Human Rights Council (HRC) adopted a landmark resolution on the human rights of older persons. Previous Human Rights Council resolutions have only established the mandate of the UN Independent Experts, without addressing the real challenges faced by older people and indicating possible measures.

This resolution was adopted by consensus and co-sponsored by several EU Member States. It mentioned for the first-time ageism and age discrimination as important human rights issues and called for specific action by states to eliminate ageism in all its forms.

This development follows up from the accomplishments seen at EU level with the adoption of the Council Conclusions on Human Rights, Participation and Well-Being of Older Persons in the Era of Digitalisation in October 2020, and the Council Conclusions on Mainstreaming Ageing in Public Policies in March 2021. Those conclusions call for a stronger commitment of the EU and its Member States to prevent and combat all forms of discrimination against older persons, and to develop adequate responses to close existing gaps in the international human rights system for older persons.

Similar commitments were reaffirmed by the European Commission in December 2021. In an answer to a question by MEP Jordi Cañas, the High Representative/Vice-President of the EU Borrell reconfirmed the commitment of the EU to strengthening the protection of the rights of older persons globally. He further pledged that:

‘the EU will actively promote a regular, coherent and comprehensive discussion on ageing as well as equitable and sustainable solutions for the needs of older persons’.

All these developments demonstrate that promoting and protecting the human rights of older persons in EU’s internal and external action is an urgent and critical priority for the EU, its Member States, and citizens.

Yet, despite these achievements, progress in advancing the protection of the human rights of older persons is in practice slow, limited, and inconsistent. Persistent ageism is hampering improvements in practice.

The European Union has not played a leading role in the global discussions at the OEWG, neither has it facilitated a European debate on strengthening the legal protection of human rights in older age despite the impact of the pandemic.

There was disappointing attendance from the EU and national governments at the last session of the OEWG in 2021. Older people and their representative organisations have not been consulted in the development of EU’s position on a UN convention, neither have they been invited as panelists in the last OEWG sessions.

This needs to change.

The EU needs to take concrete action to live up to its commitments, starting by listening to older people.

Now is a good time for older people’s organisations, self-advocates, human rights organizations, national human rights institutions, equality bodies and other supporters of the cause for equal rights in old age to call on the EU to move from words into action.

On 3rd March, AGE will join the Global Rally launched by the Global Alliance for the Rights of Older People. This international mobilization ahead of the 12th session of the OEWG aims to put pressure on national governments and the EU to participate actively in the global discussions about the equal protection of human rights in older age.

During 24-hours, various campaign actions will mobilise advocates around the globe. Share your support with the hashtag #AgeWithRights and join events on the D-Day!

Read more on the Global Rally and how to get involved

In the next weeks, we will work with our members, Members of the European Parliament, and partners to ask the EU to lead the rallying for our human rights in older age. To be more impactful, we need older people across the continent to echo the same message and mobilise their national government.

To support this rally, you can:

Let us know your plans, so that we can amplify your message. Contact our colleague Estelle Huchet to share your initiative or ask for support: estelle.huchet@age-platform.eu.

Only together will we make a difference. So, on March 3rd, let's rally in numbers to defend our rights in older age!