Future of the Europe: the EU at a crossroad in its history 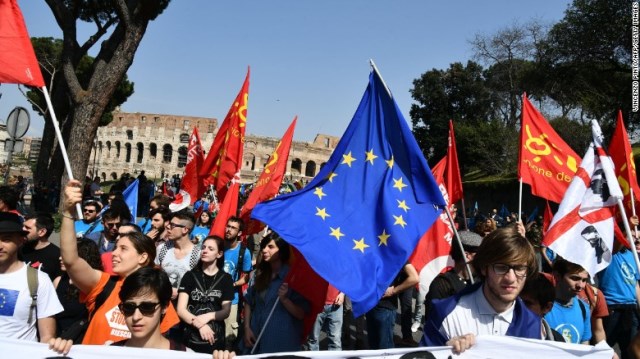 The heads of state or government of 27 Member States of the European Union and the presidents of the main European institutions met in Rome on 25 March to celebrate the 60th anniversary of the founding Treaties of Rome. Around twenty events relating to Europe took place on that occasion gathering civil society and European and national political leaders.

Alongside the official programme, a 'March for Europe' was also organised to mobilise citizens around a strong and united Europe.

Rome celebrates unity… with a worried look at the future

Despite the acknowledgment that the European project has contributed a lot to maintaining peace and spreading common democratic values in Europe in the last decades, the European leaders shared feeling of a profound uncertainty about the future of the European Union. The persistent economic and social crisis combined with the baby-boomers’ demographic “pressure”, the migration and refugee’s crisis, the growing fear of terrorist attacks, the shock of the Brexit referendum… are major challenges that the Union has been facing over the last few years and which raise further questions about its future development. 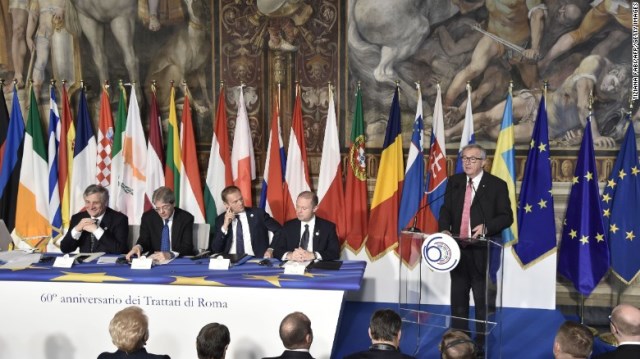 “However daunting our challenges may feel today, they are in no way comparable to those faced by our founding fathers”, stressed the President of the European Commission Jean-Claude Juncker in his speech. He also reminded the reason why they were all gathered in Rome: “We do so to solemnly renew our vows and reaffirm our commitment to our undivided and indivisible Union. But we do so not out of nostalgia. We do so because only by staying united can we rise to the challenges we can face together”.

Moving forward, possibly at different paces, but all in the same direction

At this turning point in EU’s history, the EU leaders agreed that the European project needs to be now redefined with its 27 Member States.

France, Germany, Italy and Belgium defend the position of a multi-speed Europe allowing states that want to go faster to do so without waiting for the slower countries. As the declaration reads, "We will act together, at different paces and intensity where necessary, while moving in the same direction, as we have done in the past, in line with the Treaties and keeping the door open to those who want to join later".

However, the assurances that enhanced cooperation should be open to all within the Treaties and that there will still be only one European project did not convince everyone. Some Central and Eastern Europe countries that joined the EU in 2004 have expressed concerns that a shift to a multi-speed EU would create second-class members. Tusk's speech especially focused on the risk of political unity disappearing in Europe and reminded that it is "much more important that we all respect our common rules such as human rights and civil liberties, freedom of speech and freedom of assembly, checks and balances, and the rule of law.  This is the true foundation of our unity", he said.

The Rome Declaration is available on EC website: http://europa.eu/rapid/press-release_STATEMENT-17-767_en.htm

Future of Europe to be addressed later

The EU27 heads of state and government wished to celebrate their common project in Rome, focusing on what unites them and postposing the important decisions to determine the future of Europe at a later stage, until the second half of 2017.

The basis for the discussion will be the White Paper on the future of Europe, published by the European Commission on 1st March. This paper proposes 5 possible scenarios for the future development of the European Union:

Read here the press release of the European Commission

Prior to the celebrations, AGE released a press statement calling on the European leaders to seize the momentum of the 60th Anniversary of the Rome Treaties to rebuild a truly collective project for the EU integration and identity, based on social progress, inclusion and solidarity. AGE members insisted on the need for a European Union that helps its Member States address the current global challenges while getting closer to its citizens’ concerns.

This common reflection among AGE members will continue in the upcoming months through the work of our Task Forces, as well as at the 2017 General Assembly next June.  AGE members will also carry on the debate on the future of Europe with other civil society stakeholders and political leaders at national level.