From discrimination to abuse in older age: the insidious process brought to light by COVID-19 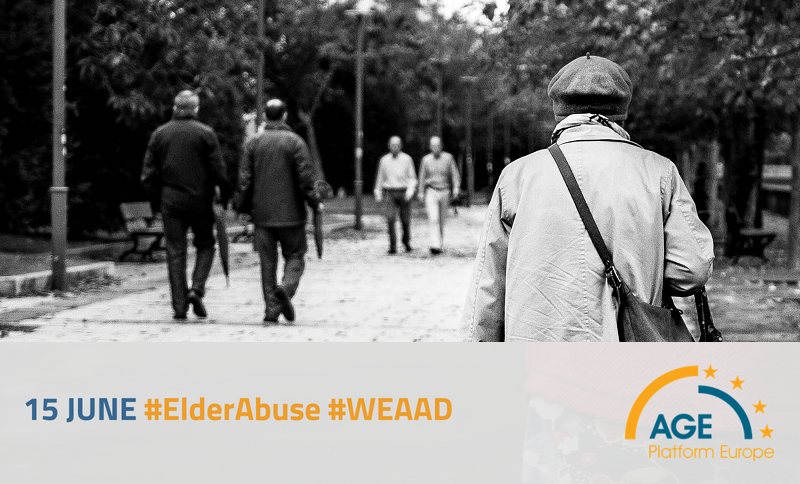 As widespread reports and figures have demonstrated since the beginning of the outbreak, the COVID-19 pandemic has disproportionally affected the older population across Europe and the world. This increased vulnerability to the virus is mainly due to a higher prevalence of risks factors, such as underlying comorbidities, which may lead to more serious health conditions and impact the chance of surviving intensive medical intervention. But not only.

“When we look at the number of people who lost their lives because of COVID-19, half of them were older persons who were never brought to hospital,” highlighted recently our Secretary-General, Anne-Sophie Parent.

While it was well known quite from the beginning of the pandemic that older people in residential care facilities are at a higher risk for infection and adverse outcome, in several countries, half of the deaths due to COVID-19 have happened in care homes, often because of lack of adequate protective measures and equipment. In several countries residents did not even have access to necessary diagnostic and medical care.

"If half of European Covid-19-related deaths happened in care facilities, it is largely the result of a long-term suffocation of the sector and a lack of consideration from political leaders to imagine and design the world we want to age in", stress our colleagues Estelle Huchet and Borja Arrue in an opinion for the EU Observer.

Neglect, mismanagement and overlooking older people’s needs are the result of ‘structural’ ageist perceptions, which, as our Human Rights Coordinator, Nena Georgantzi, recently stated “act as a driver for further human rights violations, including our rights to life, to health, to family and to participation in society”.

COVID-19 has revealed once more the strong impacts of ageism

We have lately seen an increase in…

Situations of abuse among some population groups, whose dependence on family members for their daily survival and care make especially vulnerable, have been exacerbated by lockdown conditions, as a United Nations’ Policy Brief published early May shows.

Estimates before the COVID-19 pandemic suggested that 1 in 6 older persons were subjected to abuse in 2017. This year this proportion could be even bigger.

In the UK, for instance,  data suggests an increase of 25% in the number of calls to helpline services that assist older people experiencing abuse over the lockdown. For other countries we lack data, but a similar reality is starting to emerge.

If elder abuse was already happening behind closed doors, lockdowns have only worsened the picture. The isolation in which such abuses happen has only increased. With fewer witnesses, greater care responsibilities for relatives and care services unable to function properly, the well-known conditions for abuse have grown.

Another – perhaps more insidious - form of abuse has also been on the rise since the beginning of the pandemic: hate speech and ageist comments have gained visibility in the media, as the United Nations’ Independent Expert on the enjoyment of all human rights by older persons has rightly denounced in a recent statement. Older persons have been in the last few months increasingly stigmatized as frail, dependent, as some sort of burden to society, as if all of them experienced the same symptoms and the same risk of death by the sole virtue of their age.  Such stigmatization is not without consequences on older persons’ dignity. Aren’t those kinds of discriminatory ideas behind which led some health authorities to refuse to admit older persons with COVID-19?

"Our response to COVID-19 must respect the rights and dignity of older people", insisted UN Secretary-General António Guterres in a powerful statement that was largely supported by UN 146 Member States, including by EU countries and the EU itself, and welcomed by more than 100 civil society organisations worldwide.

The Council of Europe Commissioner for Human Rights Dunja Mijatović recommended to member states « to reckon with the grim reality that a substantial number of deaths, up to half according to the WHO Regional Director for Europe, occurred in long-term care facilities, in particular in care homes for older persons ».  Calling or lessons to be learnt, Ms. Mijatović stressed that the high levels of mortality in care institutions were in part due to issues over quality of care; the lack of personal protective equipment among care staff; lack of adequate epidemiological surveillance; inadequate infection prevention and control measures; and insufficient co-ordination between these institutions and hospitals.

Fighting elder abuse and all other breaches of human rights in older age involve fighting ageism as a structural factor of stereotyping and discrimination. We have identified a set of recommendations to move forward, including making sure that age as such is not a factor applied to refuse access to healthcare.

More specifically on elder abuse, as we have highlighted on the occasion of the World Elder Abuse Awareness Day, it is essential to make sure older victims and survivors can receive the support they need and be protected from further abuse. The implementation of the 2020-2024 EU Strategy on Victims’ Rights is a great opportunity for the EU and member states to include older victims and survivors in their relevant policies and legislation and make sure no one is left behind.

Ways out of ageism were also brought forward by our colleague Nena Georgantzi, AGE Human Rights & Non-Discrimination Coordinator, at a webinar on 'Protecting the rights of older persons during the COVID-19 pandemic', in particular the need for increased awareness, change of narrative about older age, more involvement of older persons and strenghtened legislation.

On the occasion of the Day the World Health Organization (WHO) has also published a new guidance note on what can be done to address violence against older people during the COVID-19 response.

Ending ageism is a collective challenge. Let’s take it up together.

See also how, across Europe, AGE member organisations are getting mobilized to mark the World Elder Abuse Awareness Day.