Read this release in Spanish (translation by CEOMA)

On the eve of the 8th European Day of Solidarity between Generations, celebrated on 29 April, many disadvantages and obstacles still prevent the equal participation of the young and the older generations across the European Union. To mark that EU Day, the European Parliament Intergroup on Active Ageing, Intergenerational Solidarity and Family policies, AGE Platform Europe and the European Youth Forum join forces to organise an event to shed light on the widespread experiences of ageism at both ends of the life spectrum with the support of MEPs from various political groups.

We are living for longer… this is an obvious fact for most EU countries. But although this positive development should significantly influence our perception of ageing, many negative and out-dated stereotypes still prevail and impact older people in their everyday lives. “If the rise in life expectancy is acknowledged through pension reforms being implemented across the EU, this societal achievement is not reflected in all areas of society in which age barriers and prejudices remain persistent for older persons”, points out Anne-Sophie Parent, Secretary General of AGE Platform Europe.

At the other end of the age spectrum, younger people continue to face discrimination and do not have access to their rights, preventing them from leading the kind of autonomous, independent lives they should. “Young people are often perceived as inexperienced due to their age, regardless of the actual knowledge, skills and capacities they possess” highlights Allan Päll, Secretary General of the European Youth Forum. Almost one in five young people experienced age-based discrimination when looking for a job, based on the results of the Youth Forum’s survey on Multiple Discrimination and Young People in Europe. Discrimination at an early age can negatively impact young people’s health, well-being, self-esteem and sense of belonging, all of which are likely to hinder their transition to adulthood and autonomy.

Ageism is indeed experienced both by older and young people. It is entrenched in attitudes but also in many laws, policies and practices. This so-called ‘structural ageism’ reflects age prejudices and de-prioritise, disregard or even exclude older people, as AGE Platform Europe explained in a new position paper which gathers the views of some of our 150+ member organisations’ common experiences and makes recommendations to promote older people’s rights in the context of intergenerational fairness.

Promoting intergenerational interactions to create equal societies is essential here. As underlined by Alojz Peterle, MEP for the EPP group and Vice-President of the Intergroup's subgroup on Active Ageing and Solidarity between Generations, "neither citizens nor MEPs stand the inequalities and discrimination. We should tackle ageism entrenched in attitudes, organisations, laws and practices that creates obstacles to the equal participation of the young and the older generations by better collaboration. Solidarity between generations begins with a fundamental respect for individual's human dignity. To me intergenerational solidarity offers a platform that will inevitably lead to a higher degree of social inclusion by bridging similar challenges both older and young people are facing: how to be an active and valued contributor to society."

Heinz K. Becker, MEP for the EPP group and Vice-President of the Intergroup's subgroup on Active Ageing and Solidarity between Generations, added that “by boosting solidarity and cooperation between generations we foster the exchange of experience and knowledge and therefore we strengthen cohesion of younger and older generations. Moreover we give a fresh impetus to the European economy.” 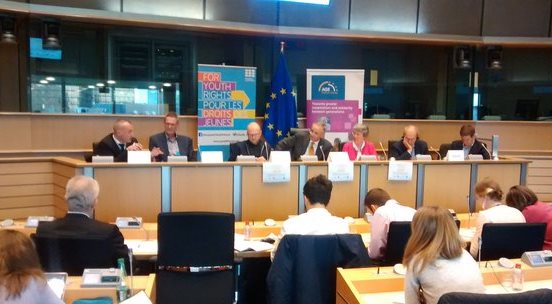 The joint event at the European Parliament was the opportunity to build the case for intergenerational exchange and solidarity and ensure that young and older people work together for the creation of fairer, more inclusive and sustainable societies for all ages. Two best practices were notably presenting, one led by Stadsdorpen and one by Volunteurope, which are both aiming to build bridges between younger and older people in their communities, in urban and rural areas. Lambert van Nistelrooij, MEP for the EPP group and Coordinator of the Intergroup's subgroup on Active Ageing and Solidarity between Generations underlined that "in these times of demographic changes, cities and rural areas face their own issues. I see the importance of both younger people and older people in these situations. Europe has to take serious lessons out of the experiences rural areas and cities are facing. It is a wake-up call. Whether we are 15, 40, 70 or even 100, managing our future together is the key forward."

A variety of speakers, MEPs and NGO leaders, shared practices and perspectives of both age groups. This was followed by a debate open to audience which generated new ideas and discussion common vision of a society for all ages. Concluding the event, Brando Benifei, MEP for the S&D group, ViceChair of the Youth Intergroup and Member of the Intergroup’s subgroup on Active Ageing and Solidarity between Generations, called on the EU institutions to take action to promote intergenerational solidarity: “steps were made during the European Year 2012 on Active Ageing and Solidarity between Generations, but some others are still lacking. We need to continue pushing for the Horizontal Directive and to contribute to the on-going discussions around the EU Pillar of Social Rights, the European Accessibility Act and the social aspects of the Country Specific Recommendations within the European Semester. It is crucial to allow older and younger generations benefit from the right to independent living.”