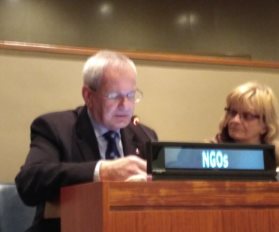 The UN OEWG held its 7th meeting at the UN headquarters in New York from 12 to 15 December 2016, in which several governments from all regions of the world took part, as well as approximately 80 representatives of civil society. AGE Platform Europe (AGE) was represented by Ebbe Johansen, Vice-President and Nena Georgantzi, Policy Officer. Heidrun Mollenkopf, Vice-President of AGE also participated on behalf of our German association, BAGSO. In addition our members and experts from the UK (Age UK International) and France (FIAPA) attended the meeting.

Two main outcomes originated from this session. Firstly, a ground-breaking decision will allow National Human Rights Institutions (NHRIs) to participate in its work from 2017. NHRIs so far were not able to directly contribute to the debate, despite being some of the most experienced human rights entities across the world. Their inclusion will complement the views of NGOs representing and working with older people and will certainly benefit the quality and depth of the discussion on the rights of older people and the best way forward. AGE welcomes this development and we hope that participation rights will also be extended to both the international and regional coordinating committees of NHRIs, such as the European Network (ENNHRI), with which AGE closely collaborates on a number of occasions.

Secondly, instead of merely debating the need or not for a new UN instrument and the form this might take (in particular whether it should have a binding effect), the Working Group agreed on gearing towards a more substantive focus during its next gathering scheduled for July 2017. Such a deliberation would intend to unveil the particular issues faced by older people in order to make an informed decision about the elaboration of further human rights instruments. This political shift is in line with a resolution adopted by the UN General Assembly in 2012 and will allow the OEWG to fulfil its mandate. 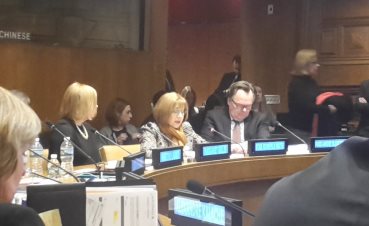 Among the many interventions during this session, the comprehensive report of Ms. Kornfeld-Matte, which was presented in the second day, was probably one of the most influential in terms of moving forward. The Independent Expert noted with concern existing gaps in addressing the particular challenges faced by older people and called on the UN Member States to consider the elaboration of a new UN instrument. Her findings agree with AGE’s report according to which due to the lack of binding effect and dedicated implementation and monitoring mechanisms, MIPAA failed to trigger sufficient policy change.  During the discussion some Member States reiterated the actuality of MIPAA while noting that it has led to uneven progress. Others suggested using the conclusions of the Independent Expert to start reflecting on the content of a new instrument.

The Chair of the Committee on the Rights of Persons with Disabilities explained the relevance of the UN Convention on the Rights of Persons with Disabilities (CRPD) for older people with disabilities but underlined that ageing is conceptually different from disability and that the CRPD norms fall short in protecting old age. She also argued in favour of a new convention for older people, speculating that if adopted it would be quickly ratified as this is a matter of huge political concern. She also clarified that if there was a convention on older persons, it could strengthen and improve the implementation of the CRPD with regard to older people with disabilities.

These statements illustrate an increasing understanding within the UN human rights system of the failure of existing mechanisms to adequately address the concerns of older people. They also converge with the views of civil society and an increasing number of Member States about the need for a new UN convention.

What is the way forward?

The following broad subjects were proposed by the UN OEWG Chair, to continue a discussion on key human rights challenges for this group in 2017: equality and non-discrimination; autonomy and independence; neglect, violence and abuse. Among these areas, two will be chosen in January 2017 and will be the focus of the 8th OEWG session. While it is still unclear exactly how the debate on these topics will take place, some Member States asked the bureau of the OEWG to prepare a background note that would serve as a starting basis. It is expected that the Chair will send a letter to Member States and civil society asking for contributions in advance of the next meeting. This is a good moment to take stock of the good practices and protection gaps identified so far by the OEWG and the UN Independent Expert on the enjoyment of all human rights by older persons and start reflecting on how they could be included in a new international instrument, such as a convention. In addition, dialogue at national and regional level before the next OEWG is crucial.

To find out more about the OEWG and how you can be involved you can refer to our January Special Briefing. In addition you can read the summary of the meeting here.

Below is a list of statements that AGE made during the 7th session: