Better Finance, an organisation representing investors and taking a consumer view on financial services, has released its yearly report ‘Pension Savings: The Real Return’. Again, the organisation highlights that many pension funds have very low or negative returns when assessment include all entry and exit fees, inflation and taxes. For the first time this research has been confirmed by a preliminary study by the European Securities and Markets Authority (ESMA). 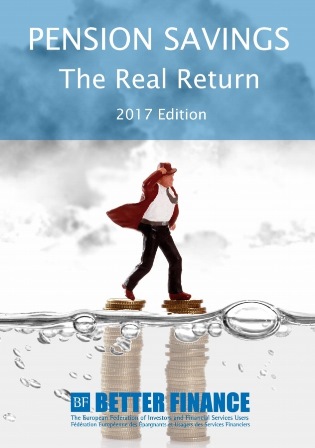 In the long term, many products underperform or have even negative results

Better Finance has analysed the long-term returns of private and occupational pension products in 15 EU member states. The analysis spans over the last 17 years, thus covering two economic downturns (the 2001 and 2007/8 crises) and two upturns (before and after the 2007/8 crisis). To the best extent possible, inflation, entry-, exit- and one-off fees and taxes have been deducted from the gross returns to make up calculations showing the real long-term return of pension funds. The performance is then compared to capital market returns, when taken as an index of shares. The result is bleak: performances of capital markets and performances of pension products are not linked. In many cases, pension funds underperform against financial markets and in some EU Member States such as in France, Italy, Latvia, Slovakia, Spain and Netherlands some categories of products even yielded negative returns, meaning that savers have lost money.

Fees and packaging the main culprits for low returns

For Better Finance the reasons are manifold, but mostly linked to the packaging of capital market products into pension products. Also, investment products often focus only on a narrow set of values (such as large caps), thereby not including the performance of other shares – even when the funds claim to represent equity markets as a whole. Also, the structure of fees and commissions paid to intermediaries, such as insurance brokers, is often unclear to consumers and might work against the idea of receiving independent advice. Considering these findings, Better Finance calls for a customer-based approach to pension savings. Information on financial products should include the assessment of the real, long-term performance (at least 10 years) of defined benchmarks, and include fees and taxes. This can help customers decide for better-performing products. Better Finance also calls for the fund returns to be monitored by supervisory authorities.

This call was taken up by the European Commission in its 2015 Action Plan on the Capital Markets Union, however it is only in 2017 that the Commission sent a mandate to the financial authorities, the European Insurance and Occupational Pensions Authority (EIOPA) and ESMA, to analyse the situation. ESMA has released a preliminary study that confirmed the findings of Better Finance: over a short time horizon (three years), ESMA found that fees and inflation have reduced returns for investors by 29 % on average.