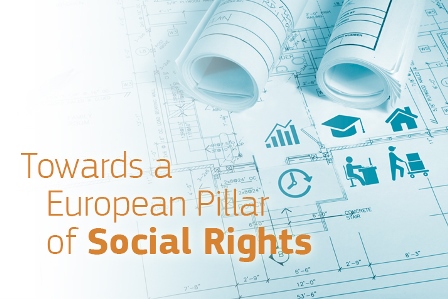 In response to the public consultation on the EU Pillar of Social Rights, which aimed at more convergence between EU countries in the fields of employment and social inclusion, AGE has published its contribution bringing older persons’ perspective in this key debate.

AGE believes that building a strong Pillar of Social Rights at European level is a necessary response to the growing poverty and inequalities resulting for a decade of economic crisis and leading to much criticism towards the European Union. These have also made older citizens more vulnerable, especially those who have health or long-term care needs, the ‘oldest old’ or older women living alone. The challenges of a changing labour market such as the ‘platform economy’ weigh on the sustainability of social protection and on the adequacy of pensions of future retirees. Persisting inequalities between women and men are reinforced with age and therefore put many current and future older women at risk of poverty or social exclusion.

We therefore support the initiative and the rights-based approach proposed by the Commission and invite the EU to make more reference to existing international rights instruments in order to build a comprehensive framework for the respect, protection and promotion of social rights.

Urging the EU to learn from the errors of the past – e.g. the lack of progress on Europe 2020 Strategy’s social targets - AGE calls for real political commitment and visibility for this new initiative and recommends a series of actions to strengthen Europe’s social acquis in a context of swift demographic change.