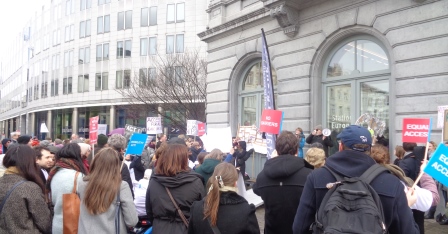 AGE joined forces with the European Disability Forum (EDF) and other European Social NGOs to call on the European Parliament not to weaken the legislation proposal on accessibility launched by the European Commission in December 2015, the so-called ‘European Accessibility Act’ 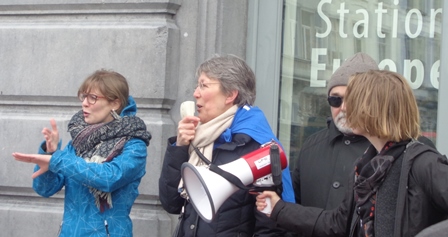 During the protest, several MEPs and civil society representatives were invited to express their support for a stronger piece of legislation which would effective promote accessibility for all. Anne-Sophie Parent, AGE Secretary General, seized the occasion to recall that accessibility is an issue of interest to everyone, not only people with disability. She also stressed the key importance of the Accessibility Act to respond to the current ageing of the population in Europe and promote age-friendly environments.

After the demonstration, some NGO representatives and a large group of about 50 people with disabilities attended the IMCO Committee meeting to follow up the latest developments on the Accessibility Act. On the whole, the discussions turned out to be less negative than in previous meetings and the attending MEPs seemed more willing to improve the proposal and engage the civil society in the discussions. The vote in IMCO on the Accessibility Act was postponed to the end of April.

Read here our joint press release sent on that occasion.

The event was echoed in the social media and in the press: