Ukraine: the ‘oldest’ humanitarian crisis in the world 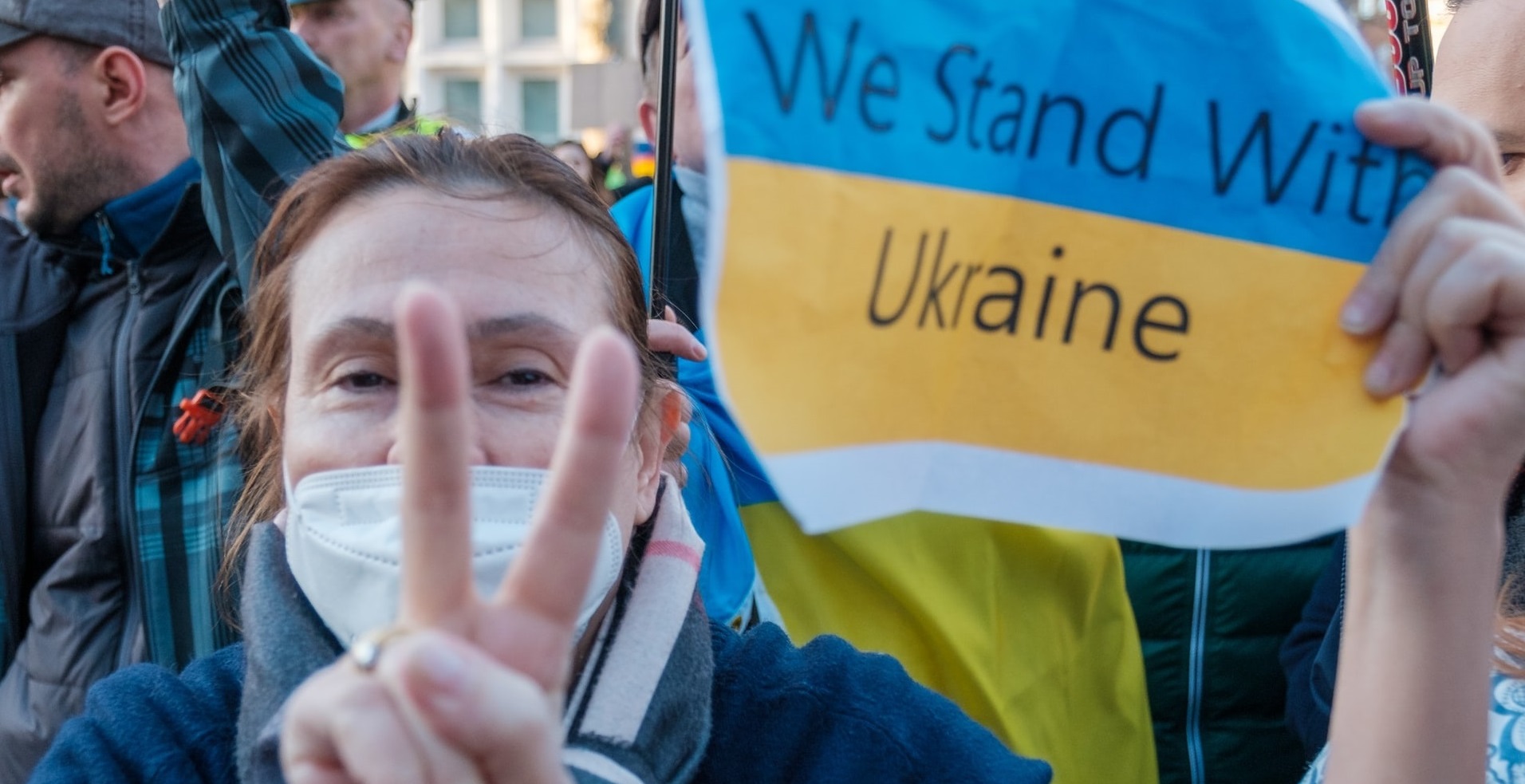 More than seven million older people living in Ukraine are currently at risk as a result of the Russian invasion. Whether they decide to stay in Ukraine or to leave the country, older people deserve equal access to humanitarian aid.

Ukraine is among the fastest ageing countries in the world (UN DESA, 2019). In 2019, there were 7 million people aged 65 or older living in Ukraine. They represent 16.7% of the total population and their number was expected to reach 20% by 2030.

Since the 24 February, civilians of all ages have been forced to hide or to flee the country. With older people making up a third of all people in need of assistance in Ukraine, this conflict can be considered the oldest humanitarian crisis in the world. To a large majority, older people are staying in Ukraine, with 99% of them preferring not to be evacuated from their homes.

Some might decide to stay to protect their family's property, or even to take up the arms like Valentyna Konstantynovska, 79, who attended a combat training for civilians in Mariupol, in Donetsk. But others might have no other choice but to stay.

‘Thousands of people, including older people, pregnant women, as well as children and people with disabilities, are being forced to gather in underground shelters and subway stations to escape explosions. Many people in situations of vulnerability are separated from families and effectively trapped’ reported the UN High Commissioner for Human Rights, on 3 March.

In many cases, older people didn’t escape from war zones because they were unable to do so due to limited mobility or because they did not want to.

‘During hostilities older people have chosen not to flee their homes when fighting neared. They thought they would not be attacked, or wanted to protect their family’s property, or had suffered physically or emotionally from fleeing earlier attacks. In many other instances, older people have been unable to flee because of limited mobility, disability, or because families could not assist their flight’ writes Human Rights Watch.

UN human rights experts have warned that many civilians risk dying during the Russian military operations in Ukraine due to ‘the destruction of essential infrastructure, including health care facilities and institutions for older persons with disabilities’.

International law exists to protect civilians in time of war; it should equally apply to older people. Specific protections and direct engagement with organisations of older people may be necessary to increase the visibility of and address the specific needs of this population in operating procedures.

The UN Special Rapporteur on the Rights of Persons with Disabilities and the UN Independent Expert on the Rights of Older Persons have emphasized the need to ensure accountability for any violations of the rights of older persons and those with disabilities in the conflict. They encouraged civil society, the UN and other agencies, to actively monitor, record and report the situation on the ground.

HelpAge International – a global network of organisations promoting the right of all older people to lead dignified, healthy, and secure lives – has been providing support to older people in Ukraine since 2014. Since the Russian invasion, older people living in Ukraine are at extreme risk of being denied access to food or medicine, displaced, or hurt by the conflict.

Several AGE members are involved in HelpAge’s Europe network and currently mobilised to provide support. To adapt their response, HelpAge staff and volunteers interviewed 1,513 older people living in Ukraine between 1st and 2nd March. Their rapid needs assessment reveals that:

HelpAge stresses that many older people have mobility difficulties and/or are living alone thus making access to these basic goods especially challenging.

Amidst a massive population exodus to neighbouring countries in the West, older people are often left behind without family or local community to support them.

‘Medical care for chronically ill is practically inaccessible as hospitals are treating wounded soldiers and civilians.  Most pharmacies are closed, and life-saving medicines are not available, especially for older persons in small towns and rural areas. Supply routes are blocked in many places or subjected to periodic shelling by the Russian army’ comments Alexandre Sidorenko, Ukrainian himself, and now Senior Advisor to the European Centre for Social Welfare Policy and Research.

As noted by Professor Peter Lloyd-Sherlock, donations seem to be focusing primarily on the needs of babies and young children with the risk of overlooking the needs of older people for incontinence pads or medicine for instance.

In this context, HelpAge International is providing humanitarian assistance by bringing food, medicine, and hygiene supplies for older people, their families, and communities.

Mobilisation at the border in Eastern and Central Europe

At the border with Ukraine, the neighbouring countries are facing the biggest population exodus in Europe since the Second World War. Older people’s organisations including AGE members in Hungary, Poland, Romania, and Slovakia have mobilised to welcome the first waves of refugees escaping from the conflict.

Read more about our members’ reactions and initiatives

‘This woman needs to continue with her chemo treatment. But since she doesn’t speak Polish, it would be impossible to help her in Poland with her medical history. Some people are seriously ill, but they have no documentation’ reports Grzegorz from our Polish member Bonum Vitae.

For people living with chronic diseases (diabetes, hypertension, cancer, etc.) among which many older people, the World Health Organisation flags that the continuity of care is vital. If some health needs pre-exist to the conflict, many are also the result of experiencing war. Already in 2014, HelpAge had identified that the vast majority of older people surveyed (96%) experienced conflict- related mental health issues in Ukraine.

Our members in Eastern and Central Europe confirm that refugees need more than food and shelter. After the first few days, each refugee needs to be helped with a psychologist, a translator, and/or support to organise their transportation to Western European countries.

As the conflict develops, support needs to refugees in Eastern and Central Europe will only increase:

‘During this first wave, only 12-13% needed help to sleep. The most of them just needed some food and were going to Germany, to France, and so on. The second wave will be quite different. Each people will be poorer, without any connection, any money, etc. They will come with one bag at the border’ anticipates Grzegorz.

‘That was just the beginning. The bombings weren’t as severe as now, they left because they have families in the West. Now are coming people who have never travelled. Their mental health is probably much worse. The problem will only get bigger and bigger’ adds Piotr.

Support expected from across Europe

Major charities are organising humanitarian help either directly in Ukraine or in the countries receiving first waves of refugees. To support older people in Ukraine or fleeing the country:

In times of war, those in the most vulnerable situations, including many older persons are often overlooked.

Any form of discrimination, be it based on age or other grounds, in access to humanitarian aid, health care, in asylum applications or elsewhere cannot be tolerated. Older people must be equally considered in humanitarian planning and funding provided by EU countries and equally benefit from protection measures. The evacuation of older persons from besieged and encircled areas must be prioritized by the parties to the conflict. The UNHCR guidelines for older refugees must guide emergency responses and refugee policies.

Older people must not be seen merely as passive recipients of aid, but also as active participants in recovery and response who -when provided with the necessary resources- are able to take care of themselves and support others. They must be consulted and included in decision making to better identify their needs and capacities as well as short comings in protection and assistance programmes.

Civil society must have access to funds and resources to build capacity to support and defend the rights of people of all ages, especially the most marginalised, such as those living in isolated settlements, or those in care settings.

Given the exceptional circumstances and the urgency, AGE has just started with our members and partners, including the European institutions, to monitor the situation to ensure that the rights of older people in Ukraine and those fleeing their country are respected without discrimination of any kind. Whoever you are, if you can help us in this endeavour, please contact AGE Secretary General: maciej.kucharczyk@age-platform.eu.

> with these additional resources: