A new Roadmap for Combating Social Exclusion in Later Life

Targeting policy makers at all levels, the Roadmap for Future Research and Policy Collaboration to make ageing experience more inclusive was launched on 5 March at the conference on ‘Inclusive Ageing: The Way Ahead’. The event was co-organised by the European Committee of the Regions, ROSEnet Cost Action, and AGE Platform Europe marking the end of a four-year collaboration programme between 120 researchers and practitioners from 39 countries.

The Roadmap’s objective is to maximise the commitment of all policy makers, researchers, civil society organisations, service providers and practitioners to combat exclusion in later life, and to advance innovations in policy making on ageing. The Roadmap proposes a three-strand approach (across measurement, research and policy actions) to address the causes of old-age exclusion in five domains: economic, social relations, services, community and spatial environment, and civic participation and cultural aspects.

Research shows that social exclusion of older persons is multidimensional in nature, and exclusion outcomes in one area can contribute to or trigger other forms of exclusion. To find more, see the thematic fiches on various forms of exclusion in later life published by ROSEnet: download here

AGE was a critical ally and partner from the very beginning of the ROSEnet project. Invited to join ROSEnet Older Adult Reference Group, AGE members provided researchers with evidence of social realities of older people at the grass roots level. Our input aimed at illustrating the complexity of social exclusion in later life with real life examples. Whether struggling to afford basic goods and vital services such as health and long-term care, being discriminated in employment, feeling lonely and isolated, or simply dropping out of social, civic or cultural participation, many older people experience multiple and often hidden forms of exclusion.

Therefore, our key message addressed to policy makers through ROSEnet is: Don’t underestimate older people’s vulnerabilities, neither deny the specificity of exclusion in later life!

The Roadmap had got immediate attention of the European Committee of the Regions. Birgitta Sacrédeus, from Region Dalarna in Sweden, and Jean-Luc Vanraes, from the Uccle Municipality in Belgium supported the ROSEnet closing conference – they both pledged to implement policies on ageing based on the evidence from the grassroots level. As members of the Committee of the Regions, they play key role in shaping policies at local level in their countries. We hope that they will use ROSEnet Roadmap’s recommendations to better address the needs and aspirations of older persons, in particular those who live in vulnerable situations.

For more information on ROSEnet and AGE’s work on social exclusion, you may contact Maciej Kucharczyk, maciej.kucharczyk@age-platform.eu 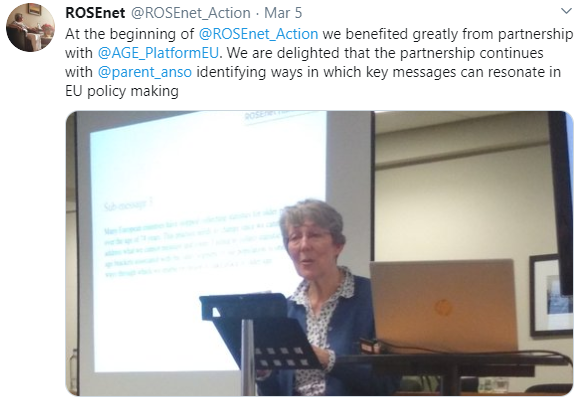 Tuesday May 11, 2021
Social rights for all generations: time to deliver on the European Pillar of Social Rights
Thursday March 11, 2021
Human rights are for all ages - Time of the EU to lead the rallying for a UN Convention
Friday February 12, 2021
EU Green Paper on Ageing: a key opportunity to make concrete steps towards a more inclusive future for all ages
Wednesday January 13, 2021
2021 promises hope for a successful recovery