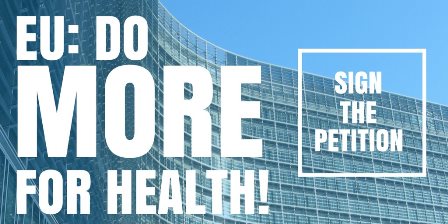 The European Public Health alliance (EPHA) is launching the campaign “EU: Do more for Health” calling upon the European Union to maintain and even enhance its action in the field of health. In a letter sent to European Commission Juncker, EPHA, the European Patients’ Forum (EPF) and a coalition of organisations express their concern about the future of health following the release in March 2017 of the White Paper on the Future of Europe, which considers the option of reducing EU action on health after 2020. For EPHA, “health is absolutely and unequivocally a core business of the EU”, an opinion which is widely shared among European citizens, as a recent Eurobarometer reveals.

As part of this campaign a petition has been opened that can be signed by any organisation willing to support EPHA’s call.

A webpage is dedicated to this campaign and includes a social media toolkit: https://epha.org/eu-do-more-for-health-campaign/

AGE is a member of the EPHA and is inviting its members to support this campaign in signing the petition and disseminating it within their network.

Health is a key issue which is likely to become even more important with the rapid ageing of Europe’s population. The European Union has an important role to play in the health area in fostering and strengthening cooperation among EU countries and building common standards to fight discrimination and inequalities.