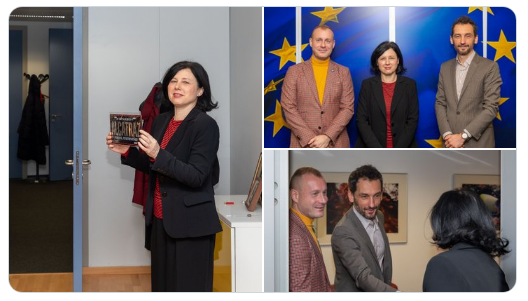 Part of the Social Platform’s delegation, our Policy Director, Maciej Kucharczyk, met Věra Jourová, European Commission Vice-President for Values and Transparency on 31 January 2020. The objective of the meeting was to discuss Commission’s work priorities for 2020 and the long-term cooperation with civil society organisations. In line with VP Jourová’s mission of ‘strengthening the links between people and the institutions that serve them’ Social Platform insisted on its members' willingness to support the Vice President in connecting with people at the grassroots level. Our common objective is to make sure that our constituencies but also people who are the furthest from the mainstream society get actively involved in the Conference on the Future of Europe which should give a new impetus to the European integration project.

Vice President Jourová confirmed her determination to carry an open, inclusive, transparent and structured debate on how the EU should address the needs and preoccupations of all population and age groups.  She also insisted on the need  for everyone to respect the European Union's fundamental values are respect for human dignity and human rights, freedom, democracy, equality and the rule of law. AGE together with other Social Platform members is committed to this starting public debate, which will be officially launched on Europe Day, 9 May 2020.

Read more on the Conference in this press release