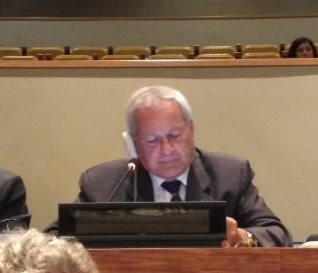 On 7th July 2017 at the 8th session of the UN Open-Ended Working Group on Ageing (OEWG) AGE President Ebbe Johansen encouraged EU Member States “to be critical about the ageist assumptions that are integrated in their traditions, laws and policies and to see what further action needs to be taken to ensure that older persons can equally enjoy their human rights”.

The 8th session of the UN OEWG provided a unique opportunity to discuss concrete elements where the existing protection of human rights could be strengthened. It focused on two key areas of rights: equality and non-discrimination and violence, abuse and neglect against older persons. The meeting included thematic panels and interactive exchange between Member States, UN agencies, NGOs, National Human Rights Institutions and experts.
AGE delegation to the OEWG included Ebbe Johansen, President, Heidrun Mollenkopf, Vice-President (who participated in the name of her national German organisation, BAGSO), Nena Georgantzi, Human Rights Officer and Borja Arrue-Astrain, Policy and Project Officer. 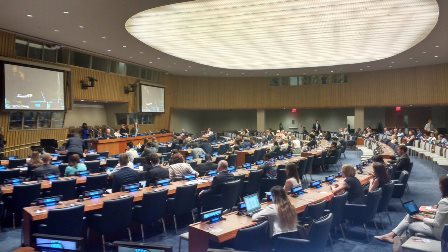 Participants led to the conclusion that despite increased attention by the human rights system on aspects of old age since the establishment of the OEWG in 2010, the existing framework has not addressed consistently, systematically and comprehensively the challenges faced by older persons. This piecemeal approach is largely due to the pervasiveness of ageism in law, policy, practice and society and led to the invisibility of a range of human rights violations in old age, such as elder abuse, violence and neglect.

Highlights of the 8th session

Ms. Kornfeld-Matte, UN Independent on the Enjoyment of All Human Rights by Older Persons explained that the prohibition of age discrimination lacks legal basis in international law. This creates great challenges in eradicating discrimination, marginalisation and exclusion of older persons. She also stressed that institutional culture tolerates the aggression and abandonment of older persons and called for appropriate preventive and monitoring mechanisms to tackle this problem, including support for caregivers and specialised training for professionals.

Mr. Craig Mokhiber, Director of the New York Office of the Office of the High Commissioner for Human Rights (OHCHR) and Deputy to the Assistant Secretary-General for Human Rights clarified that whereas older people have the same rights as everyone else, in practice these rights apply in a fragmented, uneven and incomplete fashion in old age. He argued that the existing legal and policy framework is largely inadequate to address age discrimination and involves a serious normative gap. The silence of international human rights law on this topic, according to Mr. Mokhiber, entails the lack of systematic, disaggregated and targeted data on age discrimination. He further made a strong plea to move towards the adoption of a dedicated convention that would provide much needed international standards and monitoring mechanisms.

Ms. Maria-Soledad Cisternes-Reyes, Special Envoy of the UN Secretary General on Disability and Accessibility and past Chairperson of the UN Committee on the Rights of Persons with Disabilities clarified that the few references of existing UN conventions to age are in fact targeting children and young people and not older persons. She moreover provided an empirical overview of the extent to which the current human rights mechanisms have addressed older people. According to her evaluations in a total of about 2500 recommendations by UN bodies, only 0.8% mention older persons. Ms. Cisternes-Reyes attributed this situation to the fact that there is no specific instrument that reinforces the position of older persons in the existing system. 51 years after the adoption of the first UN human rights treaties, she argued that it is high time to increase the protection of the rights of older persons through a new legally-binding convention and called for a draft that includes elements for a new treaty to be considered for the next OEWG session.

Mr. Rio Hada, from the Office of the United Nations High Commissioner for Human Rights (OHCHR) in Geneva stated that 1 out of 6 older persons in the world suffer from elder abuse, which amounts to more than 141 million individuals. Putting this number in context, Mr. Hada explained that it is equal to 14 times the number of people that are affected by the Syrian crisis today. Yet – and despite a rapidly growing older population – to date the international community has turned a blind eye to this global problem. Mr. Hada also referred to the absence of adequate data about the actual extent of abuse, violence and neglect against older persons, which is largely due to underreporting, stigma and lack of monitoring. Last, he clarified that the current UN system does not have a single point of reference to report the abuse against older persons, which is not only ineffective and incoherent, but also creates extra burden to an already overloaded regime. This is why he argued that a new convention will offer robust guidance and accountability mechanisms to counter violence, abuse and neglect in old age. 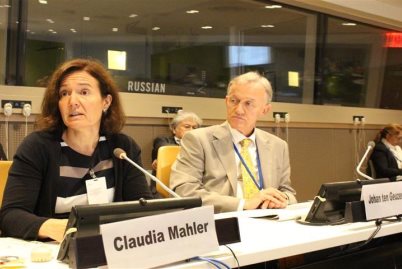 The delegation of the European Union played an active role in the debate, welcoming the substantive discussions whilst acknowledging that the two areas under the spectrum of the 8th OEWG session have not been fully explored. Mr. Johan ten Geuzendam from the European Commission also referred to the joint event organised by AGE, the Commission, the Council of Europe and Victim Support Europe on victims of elder abuse. He moreover recognized that EU law does not cover victims of all forms of elder abuse.

In addition, several EU countries participated in the session, in particular Germany, Austria, Slovenia, Spain, the United Kingdom and France who took the floor several times. Representatives of the Czech Republic, Hungary, Lithuania and Malta also made introductory statements. Some EU member states referred to existing gaps in protection and the need for further efforts. Austria also announced that in autumn 2018 they will hold a conference on older persons. Their active engagement with the OEWG is encouraging and illustrates an increased acknowledgement among EU countries about the need to better protect the rights of older persons.

The 2018 session of the OEWG will continue the analysis of elements that need further protection, focusing on the topics of autonomy and independence and long-term and palliative care. In addition, as there was general recognition that further work is needed to cover the topics of non-discrimination and abuse, it is expected that action at national and regional level should build on the outcomes of the 2017 session to discuss definitions and acceptable exceptions, their application in various areas, their interdependency with other rights and to find language that could be included in a new instrument.

AGE intends to do such work in collaboration with the European Network of National Human Rights Institutions (ENNHRI), the European Commission and the Fundamental Rights Agency. We will moreover support our national members to undertake such consultations also within their countries and to contribute to the agenda of the next OEWG. We also hope to have the opportunity to meet the Council Working Party on Human Rights (COHOM) in advance of the next session to discuss EU’s position in the OEWG. Another important piece of our work will be to ensure that the OEWG has adequate resources to fulfil their mandate and that sufficient time is allocated in the OEWG agenda for substantive discussions.

Our September Special Briefing will offer a more in-depth analysis of the 2017 OEWG achievements and what it means for AGE’s work. So stay tuned!

To read AGE’s statements in the OEWG click on the links below:

You may access the agenda of the 8th OEWG session here.

To access the full list of submissions by Member States, NHRIs and NGOs and the background analytical overview papers on the topics of equality and non-discrimination and violence, abuse and neglect click here.

An article in German is available on BAGSO website