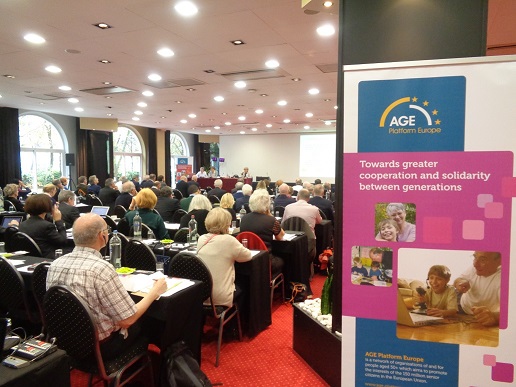 The right to be respected and treated with dignity and to participate fully in society can be a real challenge for older people, in particular in these times of persisting economic and social crisis in Europe, and despite the fact that the 65-plussers are projected by Eurostat to make up 30% of the whole European population by 2060.

During their 2016 General Assembly in Brussels on 16-17 November, the members of AGE Platform Europe, the largest EU network of people aged 50+, came together to call on decision makers at all levels to address the challenges faced by older persons with regard to their human rights.

In their final declaration, AGE members call on the European Union and national governments to make use of the potential of the Madrid International Plan of Action on Ageing (MIPAA) to strengthen equality, fairness and cohesion in an ageing Europe. Although the MIPAA contains a number of references relevant to the human rights of older people, it is neither intended to be a human rights instrument, nor it has binding effect.  Therefore, AGE members call for a new binding instrument, such as an international convention, to highlight the specific barriers that older people face in respect of their human rights. With this convention AGE is not claiming for new rights but for greater visibility of existing challenges and instruments.

AGE members also draw the attention on the need to better balance economic and social concerns, in particular by taking into account the potential  impact of economic reforms on vulnerable groups including older people.

AGE General Assembly also adopted a Manifesto drafted with the direct involvement of more than 100 representative organisations of older people. The document outlines AGE members’ vision on human rights in 7 essential principles that everyone aiming to promote older people’s rights should take into account:

1.     Older women and men have the same rights as everyone else

2.     Older people should have equal opportunities

4.     States need to take action to ensure equal rights across the lifecourse

5.     Older people should be at the centre of processes that affect their lives

AGE thanks its members for their active involvement in drafting these key policy documents.