The population of Quebec is one of the fastest ageing populations in the world. Determined to better meet the needs of the older population, researchers from the Sherbrooke University in Montreal have joined forces with the greatest ageing experts: senior citizens, who take part in every stage of an extraordinary scientific study aimed to value and empower older people.

While several similar existing initiatives invite seniors to participate in one or the other portions of a research, this co-construction study integrates the elders into the team so that they can take part in all stages of the process: definition of the topic and hypothesis, data retrieval, analysis, writing of the scientific paper and publication in a specialized journal. Beyond the research objectives, the approach contributes to the emancipation, participation and social recognition of seniors. 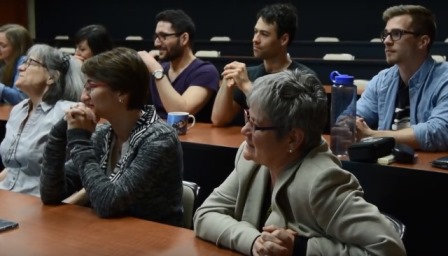 The initiative, one of the first of its kind in Quebec, started end 2016 as part of the Living Laboratory project of the Estrie-CHUS Center for Research on Aging. The intergenerational research team, which includes seven sernior citizens, addresses the ability of seniors to act in the current social context, looking at the physical and mental capacities, power over life, and social and personal constraints and limitations.