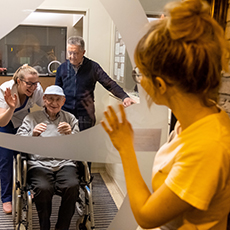 'Des Nouvelles de chez nous'/'Vanuit ons kot'-krant ('News from home') aims to help families maintain a link with the oldest relatives and break older persons' isolation during COVID-19 confinement, in particular those who are not familiar with new technologies and social networks.

The principle? Every week the older persons receives a free 'newspaper' that keep them informed of what is happening within their confined families. Children and grandchildren participate in the development of the paper by uploading photos and text to an application or site. The site operator prints the number and delivers it to the recipient's home.

The iniative was launched in early April by the King Baudouin Foundation in Belgium, and less than two weeks later it was already benefiting 1,300 isolated seniors.

A form is made available on the Foundation's website. The editor of the family newspaper fills it out and the King Baudouin Foundation provides him with the code that allows him to access the application or website of his choice free of charge until the end of the operation on 2 June. The sites are managed by private actors during the free phase co-financed by the Foundation. Three sites are taking part in the action.

Read more in those articles: